Learn about legislation that helps manage and conserve polar bears in the Northwest Territories and Yukon (Inuvialuit Settlement Region).

The Wildlife Management Advisory Councils (WMACs) for the North Slope (NS) and Northwest Territories (NWT) are the main instruments of wildlife management in the Western Arctic Region. The WMAC (NWT) and the WMAC (NS) advise the federal and territorial governments on wildlife policy, management, regulation, and administration of wildlife, habitat and harvesting in the Inuvialuit Settlement Region (Inuvialuit Final Agreement, sections 14 and 12 respectively). The recommendations of these joint management groups provide the foundation for polar bear management in the ISR. These recommendations are based on best available information including traditional knowledge, local knowledge and science.  The WMACs work collaboratively with the IGC (Inuvialuit Game Council), HTCs (Hunters and Trappers Committees), and governments in research, monitoring and management of polar bears and their habitat. The WMACs consult regularly with IGC and HTCs, and these groups assist the WMACs in carrying out their functions.

IGC works closely with the six Hunters and Trappers Committees (HTCs) in each community in the ISR to ensure that Inuvialuit knowledge and perspectives are integrated into all levels of management. IGC also works closely with the Wildlife Management Advisory Councils (Northwest Territories & North Slope) on recommendations to governments regarding polar bear management, as well as with the Yukon and Northwest Territories Governments, and the Government of Canada, directly.

The IGC also allocates polar bear tags that have been designated to the Inuvialuit among the six communities in the ISR, and has determined that no more than 50% of tags can be allocated to sport hunting by any one community, with the rest available for subsistence harvesting by Inuvialuit.

The comprehensive land claim affecting the Western Arctic Region of the Northwest Territories and the North Slope of Yukon was settled in 1984. The land claim agreement was passed into federal law and is known as the Inuvialuit Final Agreement (IFA). In the Inuvialuit Settlement Region (ISR) of the NWT and Yukon, wildlife is managed in accordance with sections 12, 13, and 14 of the IFA. These sections define the principles of wildlife harvesting and management, identify harvesting rights, and explain the joint management process and conservation principles. They define the structure, roles and responsibilities of the Wildlife Management Advisory Councils  (WMACs) for the North Slope (NS) and Northwest Territories (NWT) governments, the Inuvialuit Game Council (IGC), the Inuvialuit Hunters and Trappers Committees (HTCs), the Environmental Impact Screening Committee (EISC) and the Environmental Impact Review Board (EIRB).

All Polar bear subpopulations in the ISR are shared with other jurisdictions; therefore, it is imperative that management actions are coordinated with applicable jurisdictions. Polar bear subpopulations shared with Alaska (Southern Beaufort Sea) and Nunavut (Northern Beaufort Sea and Viscount Melville Sound) have user-to-user agreements. The Inuvialuit-Inupiat Polar Bear Management Agreement in the Southern Beaufort Sea was established in 1988 (last revised in 2011); and the Polar Bear Management Agreement for the North Beaufort Sea and Viscount-Melville Sound Polar Bear Populations between the Inuit of the Kitikmeot West Region in Nunavut and the Inuvialuit was established in 2006. These agreements facilitate coordinated management of polar bears including managing polar bear harvest on a sustainable yield basis, protecting bears in dens and family groups and encouraging that the female proportion of the harvest does not exceed one-third of total harvest. There is also a 2008 Memorandum of Understanding between Environment Canada and the United States Department of the Interior for the Conservation and Management of Shared Polar Bear Populations. 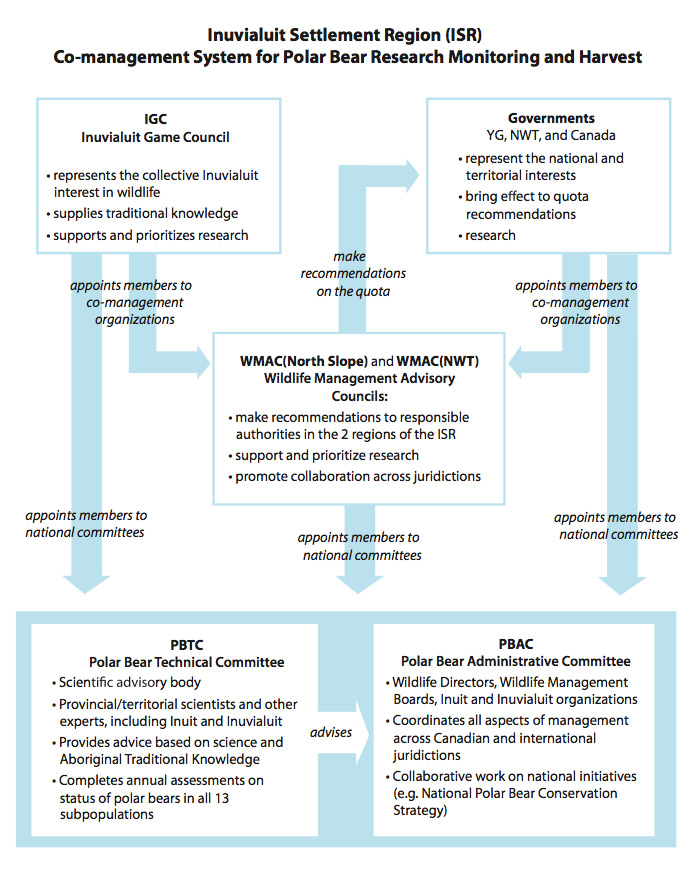